Results At A Glance 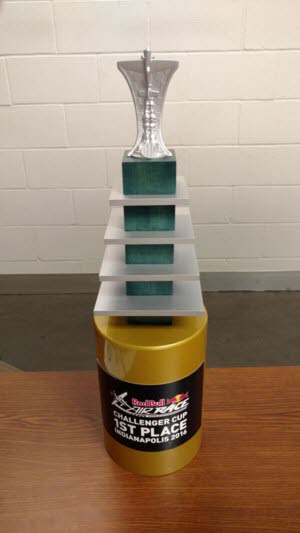 We were invited to be a part of this project, building the Red Bull Air Race Indianapolis Trophies, by Head Designer, Brian Presnell of Indy Urban Hardwood, in 2016.

The makers invited to collaborate on this project were all tenants of the Circle City Industrial Complex in its early stages of revitalization. The building itself had an energy all its own, which we, the tenants fed on like piranhas.

The CCIC, previously known as the Schwitzer Building, was constructed in 1918 by Louis Schwitzer, an Austrian immigrant who came to this country with $18 dollars in his pocket. The Schwitzer Corporation was a major auto industry force during the post-WWI War era. Louis Schwitzer was an automotive pioneer who was responsible for significant improvements in cooling, hydraulics and the development of the turbocharger. Louis Schwitzer won the very first race at the Indianapolis Motor Speedway which was a two-lap race - five miles total on a dirt track,on August 19, 1909.

That entrepreneurial spirit lives on in the building today, largely through the efforts of Teagan Development, who has continued to lead the revitalization of the building, keeping those good vibes going.

There is nothing worse than never having the opportunity to try new things...to see what you can do. We can never express our gratitude enough for being asked to be a part of this project. It was an amazing adventure, with even more amazing people, amazing juju and a whole lot of fun.